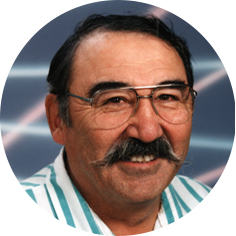 It is with great sadness that the family of David Lionel Bellegarde announces the passing of our beloved husband, father, grandfather and uncle on Monday, September 7th, 2020 at Extendicare in Moose Jaw, SK.  Dave was born in Balcarres, SK on September 9th, 1934.  He attended the Lebret Indian Residential School and in April of 1952 he joined the Royal Canadian Air Force.  During his career he was stationed at 10 different bases.  In 1964 while stationed at Vald’Or, Quebec, he met and married his wife Betty.  After that he was stationed at St. Hubert, Ottawa, North Bay, and then Moose Jaw in 1975.  He retired from the Canadian Forces in 1977 after 25 years of service.  Dave then worked for the Moose Jaw Public School Board for 18 years, retiring in 1999.  Before his stroke in 2002, he loved golfing and was a long-time member of the Lynbrook Golf Course.  He was predeceased by his mother, Josaphine McDougall (Paddy); sisters, Helen Brecht and Mildred Bird; brother, Bill (Helen); brothers-in-law: Philip, Kenneth and Robert Stone; and good friends: Bert Walts, Glen Wiggins and Gerry Stonechild.  David is survived by his loving wife of 56 years, Betty; daughter, Nancy (Cam Ewart); son, Peter (Crystal) and their children Mackenzie and David; sister, Elaine Kerney (Glenn); brother-in-law, Peter Brecht; as well as many nieces, nephews and cousins.  He was a wonderful husband, father and grandfather and will be sorely missed and lovingly remembered by all who knew him.  Many thanks to the excellent staff at Extendicare for the care during his stay there.  Due to the current Covid-19 health situation, a Private Family Service will be held.  In lieu of flowers, donations in Dave’s name may be made to The Royal Canadian Legion Branch #59, 268 High St W, Moose Jaw, SK S6H 1S8, Moose Jaw Food Bank, 305 Fairford St W, Moose Jaw, SK S6H 1X6, or The Moose Jaw Humane Society, Box 1658 Station Main, Moose Jaw, SK S6H 7K7.  Arrangements are entrusted to Moose Jaw Funeral Home, 268 Mulberry Lane.  Todd Sjoberg, Funeral Director 306-693-4550.