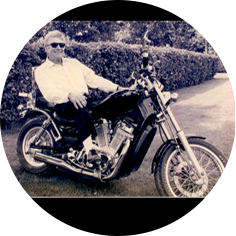 With heavy hearts we announce the peaceful passing of Andy Banilevic, a loving husband, dad, grandpa, brother, uncle and friend.

Andy was born and lived on a farm located between Ormiston and Kayville, SK until he was 12 years old when he moved with his family to Moose Jaw, SK.

Shortly after moving to Moose Jaw, he started his first job delivering groceries on his bicycle for Hi-Way Grocery.  He then worked as a Red Cap for CP Rail selling merchandise to the passengers on the train, and ultimately becoming a plumbing apprentice with Stellar Heating and Plumbing, which would lead to a long and successful career.

In April 1964, Andy met Ann Smith (a.k.a. Gladys Banman) at Temple Gardens Dance Hall.  The story of how they met would often be retold and would always make us laugh.  Andy and Gladys were married on September 12th, 1964 and began their beautiful life together.  Shortly after their marriage Andy also won over the lifelong affection of Gladys’ mom Mary when he installed indoor plumbing at the Banman family farm, just one of the many projects he would complete there.  Andy was always willing to lend a hand to anyone who needed it and he had an amazing work ethic, a trait which he passed down to his children, his motto being that if someone comes and looks at your work you want to be able to say with pride “I did that”.

Andy played as hard as he worked and he always made time for family and friends.  Andy loved dancing including a nice slow waltz and the quicker polka but his favourite was the jive… watching or dancing with him would bring a smile to your face.  Andy built a pool in his backyard in 1970 that provided endless hours of enjoyment all summer long… starting with parties with their friends through the years to parties for his grandchildren – we all have great memories that centre around backyard BBQs, Neil Diamond music and swimming.  Another highlight each summer was our camping trips, always starting with May long weekend when we would meet Steve and Marian and family in Cypress Hills, and then a big trip later on in the summer… with a tent trailer when the kids were young, then the Leocraft Motorhome that he bought in 1980 and loved to drive.  We sure did see a lot of places from BC to PEI and from Alaska to California and Texas… making memories that have lasted our entire lifetime.

Andy loved to golf, teaching all of his children and some of his grandchildren how to play the game… but you had to be quick as you didn’t want to hold up the people behind you.  Most of the grandchildren can tell you they got to drive the ball and putt, however playing the fairway was another story.  He also enjoyed fishing with family… with many good stories about the miniature bat that he used to “bop” the fish on the head.

Andy enjoyed watching his children and grandchildren in all their activities and was always so proud of everyone’s accomplishments, bursting at the seams when he would relive the moments to others.  Andy was well liked by many but children adored him and he loved them right back – it wasn’t unusual to find him playing with them on the floor or they would be snuggled up on his lap.

Andy, we sure will miss your big smile, your belly laugh, the peace sign wave that you greeted everyone with and the thumbs up when things were good.  Your memory will be cherished and held forever in our hearts.

Thank you to the caring staff at Providence Place Guardian Grove and Dr. Vermaak for the exceptional care and compassion that they treated Andy with over the last two years as his Dementia progressed.

A Private Family Celebration of Andy’s Life will be held on Saturday, October 17th, 2020 at 2:00 p.m.  We will be live-streaming the service for family and friends to join us from near and far.  To view the service, please click here.