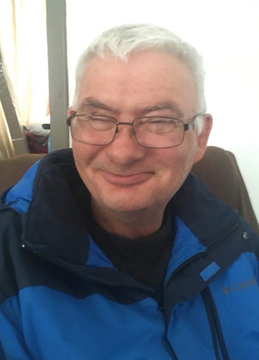 Neil Patrick Anton passed away peacefully on Saturday, October 15th, 2022 following a spinal cord injury.  Neil grew up in Regina, SK where he attended Harold Degroot School and started working at The Vagabond Hotel where he worked in the kitchen.  In December 1981, Neil moved to Valley View Centre in Moose Jaw, SK where he spent the next 31 years working in the residential laundry.  It did not take Neil long to realize that if he asked for extra chores the staff would reward him with either money or extra coffee.  Neil had a strong attachment to a special group of smoking friends which he often greeted by name with “Hows You”.

On Neil’s birthday in 2016 he moved to his new home as an independent resident supported by SaskAbilities.  Here, Neil gained true independence and continued to live his best life.  Every Tuesday and Thursday morning Neil worked at Diversified Services, where he would recycle cardboard along with a weekly trip to Sarcan.  His Monday night bowling was important as well.  You can always count on Neil to make a few strikes for the team.  Almost daily, Neil would visit his sister, Elaine and brother, Allan for coffee and a bologna sandwich with mustard and ketchup.  Usually the visit was quick but he managed all the recycling, garbage and pop cans that were collected.  Neil liked to BBQ hamburgers for his roommates Linda Brandt and the staff.

He was predeceased by his parents, Nick and Eileen; brothers, John and Paul; grandparents: Adolph and Josephine Anton, and Wesley and Sophie Beitel.  Neil is survived by his siblings, Allan Anton and Elaine Anton of Moose Jaw, SK, Donna (Glenn) Anton Harned of Prince George, BC, Garth Anton of Seattle, Washington, and Carole Ann (Stuart) Anton Gregory of Regina, SK; nephews and niece: Brandon Mallory, Kaylee (Forrest) Harned Tower, and David Harned; as well as his uncles, aunts and cousins.

The family of Neil would like to express a very special thanks to ALL of the SaskAbilities Staff, Valley View Centre staff, and his many, many friends who made a difference in Neil’s life.

A Celebration of Neil’s Life will be held on Thursday, November 3rd, 2022 at 11:00 a.m. in the Harvey Room at Moose Jaw Funeral Home.  A private family interment will take place in Sunset Cemetery.  In lieu of flowers, go to MacDonald’s and enjoy a cup of coffee.  Arrangements are entrusted to Moose Jaw Funeral Home, 268 Mulberry Lane.  Michelle Ellis, Funeral Director 306-693-4550