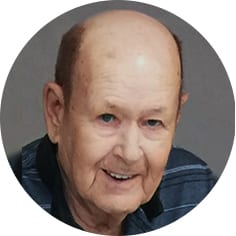 It is with sadness that we announce Gordon’s passing on Wednesday, June 12th, 2019 after a brief illness.  Gord was born in Moose Jaw, Saskatchewan on September 8th, 1936.  He was predeceased by his father, Leonard; mother, Marion; sister, June; and step-son, Darren.  Gord will be lovingly remembered by his wife, Marlyn; step-son, Kevyn (Zoe); step-daughter, Heather (Dan); and step-daughter-in-law, Cheryl.  Gord will also be fondly remembered by his step-grandchildren: Jean-Paul (Renée), Alyssa (Craig), Alexis, and Thea; and step-great-grandchildren, Emily and Ziyah.  Gordon worked for 35 years in management for the BC Liquor commission in Vancouver, BC. His greatest passions were golf and travel. His travels took him to Scotland, Singapore, Tahiti, Florida, Mexico, and Hawaii.  It was only later in life, in his retirement, that he married the woman he so adored, Marlyn. The two of them enjoyed many world adventures together. Their travels brought them to a number of far away and exotic places like New Zealand, Fiji, Costa Rica, the Panama Canal, Saint Vincent and the Grenadines, Aruba, Australia and the Dominican Republic.  In keeping with Gord’s wishes, a Private Family Service will be held.  We would like to thank the staff at Providence Place for the years of patience and kindness they showed Gord.  In lieu of flowers, donations in Gord’s name may be made to the Providence Place Foundation Inc, 100 – 2nd Ave NE, Moose Jaw, SK S6H 1B8.  Arrangements are entrusted to Moose Jaw Funeral Home, 268 Mulberry Lane. Gary McDowell, Funeral Director 306-693-4550.