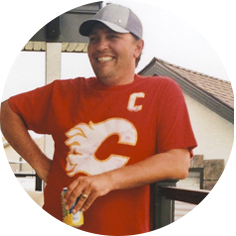 We are truly crushed and we will miss Gord forever.  Husband to Beckie, dad to Griffin, son of Margaret Andrews and the late James (Jim) Andrews. Gord was the New Year’s baby born in Assiniboia, SK on January 3rd, 1974.  He grew up in Crane Valley, SK and was the youngest of five.  Gord moved to Moose Jaw after high school to attend SIAST.  He worked at Raider Industries for years before starting his career at C.P Rail.  Gord enjoyed curling, slow pitch, camping, boating, watching hockey and golfing.  But more than anything he loved spending time with his family and friends.  Gord was a proud man who loved his family deeply.  Griffin truly was his pride and joy.  He was an incredible husband, father, son, son-in law, brother, brother-in-law and uncle.  If you knew Gord…you loved Gord.  He had the biggest heart and would do anything for anyone.  Beckie and Gord were blessed with one son.  You would always find Gord on the sideline of whichever sport Griffin was playing, whether it was at the hockey rink, football field or the ball diamond.  In recent years they started to billet junior hockey players who all became family.  Gord was a dad to many.  Gord was the most gentle, kind, supportive, loving, hardworking and patient person.  He truly was an amazing man and had a smile that lit up the room. Gone too soon.  We will never understand why, but we will forever be thankful we had him as long as we did.  Gord will be deeply missed by Beckie and Griffin (Molly and Mater); Mother, Margaret; siblings, Walter and Beth Andrews (Delise, Darla); Robert Andrews (Trent, Connie, Michael, Desirae); Bessie Andrews (Jessica and Dawn); Mary and Dave Antonenko (Carla, Judy (deceased)); mother and father-in-law, Brenda Reilly and Ron McLauchlan and sister-in-law, Barbie (Kirk) Given (Hudson and Harper) as well as numerous extended family members.  We would like to thank everyone for the overwhelming support and condolences that we have received as a family.  The Funeral Service will be held on Wednesday, July 12th, 2017 at 1:00 p.m. at the Moose Jaw Alliance Church, 14 Neslia Place Moose Jaw, SK. with Pastor Bill Luther officiating. In lieu of flowers, an account has been established for Griffin in Beckie Andrew’s name.  Donations may be left at any Royal Bank of Canada. Arrangements are entrusted to Moose Jaw Funeral Home, 268 Mulberry Lane.  James Murdock, Funeral Director 306-693-4550