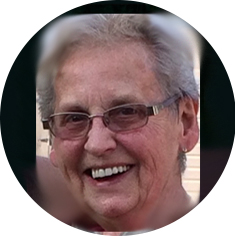 It is with heavy hearts that the family of Elizabeth (Liz) Andrei announce her sudden passing at the age of 82 years on Saturday, August 15th, 2020.

Liz was born in Ormiston, SK and grew up on the family farm south of town.  She attended school at Middle Valley followed by a move to Moose Jaw for Business College.  With skills learned at the Business College, she worked at Blackwood’s Hardware.  She met her husband John in Ormiston and the two married in July 1959.  They farmed south of Ormiston for many years and adopted two children, Bruce in 1967 and Janet in 1970.  Liz was an avid gardener and she also enjoyed cooking and baking for family and friends.  She was very active in the community as a member of the Oro Lake Kinette Club and then as a long-time member of the Order of the Eastern Star.  She will be very sadly missed by her family and friends.

Due to the current health situation, a Private Family Service will be held.  In lieu of flowers, donations may be made in Elizabeth’s name to the Heart and Stroke Foundation of Saskatchewan, Unit 26 – 1738 Quebec Ave, Saskatoon, SK S7K 1V9.  Arrangements are entrusted to Moose Jaw Funeral Home, 268 Mulberry Lane.  Gary McDowell, Funeral Director 306-693-4550