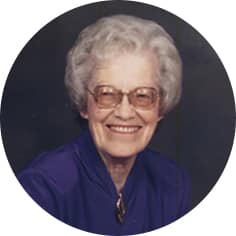 Helen Adeline Anderson (nee Salthammer) passed away peacefully with family at her side, at Pioneer Lodge on Saturday, February 6th, 2010, at the age of 96 years.  Helen was born on October 24th, 1913 in Moose Jaw.  She was raised on the family farm east of Vantage by homesteading parents.  She learned many important lessons from her remarkable parents. Mom married Norwegian immigrant Andy Anderson, in 1935.  In 1937, Andy, Helen, Jennie & Helmer (Hal) took the train to New York, embarking on the biggest adventure of their lives. They sailed for Oslo, Norway to seek a better life than Saskatchewan in the Dirty Thirties could offer.  Unfortunately, Europe was soon plunged into war and they were unable to leave.  Living in an occupied country shaped our mother’s character as someone who observed world events closely the rest of her life.  She kept abreast of world news and encouraged her family to always keep informed.  Ellen and then Olav were born in Oslo.  Sadly, Olav died before he was 3.  Andy was arrested in 1944 as a member of the Resistance and spent the remainder of the war in a Nazi concentration camp.  Throughout, Mom protected, nurtured and loved her family.  They returned to Canada in 1946, eventually settling in Chaplin for 57 years.  Linda, Carol and Gary were born after arriving in Chaplin.  Mom had children in school for over 30 years.  She still managed to become an accomplished seamstress and very involved in her community, serving with the Chaplin Home & School Association, United Church and U.C.W., and was a founding member of the Chaplin Seniors Club.  Mom was always happiest when the ever-growing family could gather. She shared a very close bond with her grandchildren and instilled in all, a strong sense of family pride and belonging. Mom loved to travel, visiting Norway, London, Hawaii, Australia, many parts of the U.S. and most of Canada.  While she loved living in Chaplin, she was always keenly interested in the rest of the world.  Mom was a dedicated C.B.C. radio listener, a keen reader, and a “news junkie”.  She moved into Moose Jaw after celebrating her 90th birthday, where she continued living independently and physically active until 95.  Mom’s faith was important to her and her church families at Chaplin and Minto were very dear to her. The family would like to express their sincere appreciation to Dr. Mark Brown for the extraordinary care he gave Mom.  Thanks to the staff at Pioneer Lodge for their comfort and care.  A special thank you to Dorothy Forsyth for always being there for Mom when her family was unable. Helen was predeceased by her beloved husband, Andy, son Olav, parents Jack & Ruth Salthammer, brother Carl (Audrey) Salthammer, sister Anne (John) Sapergia, brothers-in-law Gordon Stuart and Mitch Pattie.  She is lovingly remembered for a life well lived and well loved by Jennie (Frank) Dickson, Hal (Sue) Anderson, Ellen (George) Parchomchuk, Linda (Dale) Coates, Carol Coote, Gary (Kate) Anderson; 16 grandchildren; 20 great grandchildren; sisters Mary Stuart and Ruth Pattie.  A service to celebrate Mom’s life will be held on Saturday, February 13th, 2010 at 2:00 p.m. in Minto United Church with Gary Johnson officiating.  Internment will follow at a later date.  In lieu of flowers, donations in memory of Helen may be made to Chaplin United Church, Minto United Church, 1036 7th Ave. N.W., Moose Jaw, Sask. S6H 4C4 or the Canadian National Institute for the Blind, 2550 Broad St., Regina, Sask. S4P 9Z9.