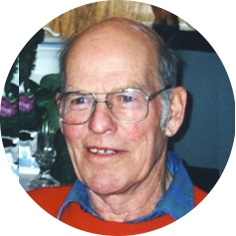 Donald William Thomas Aitken, aged 88 years of Central Butte, SK, passed away at the Moose Jaw Union Hospital on Tuesday, December 2nd, 2014.  Don was born on the Aitken homestead 4 miles east of Darmody, SK on July 28th, 1926.  He was raised on the farm with 4 brothers and 2 sisters.  Don went to school at Gallinger and Darmody.  He joined the RCAF in 1944.  At the end of WWII, he and his brothers Clark and Jim began farming.  Don was married to Doreen Wilkinson on December 27th, 1958 and they raised a family of 2 sons and a daughter on the same farm he was born on.  He farmed for about 40 years, retiring to a new house in Eyebrow, SK in 1986.  They had an active retirement – travelling, gardening, curling, golfing and helping at the farm.  Don and Doreen moved to the Bentley in Moose Jaw in the fall of 2011 and they recently moved to Iver Main Place in Central Butte.  Don was a proud member of the RCAF and the Royal Canadian Legion.  He was also an active member of many groups in the community, including the Eyebrow Curling Club, Eyebrow Rec Board, Eyebrow Senior Citizens and Eyebrow United Church.  Don was a long-time member of the Council of the RM of Eyebrow and was a strong supporter of the Cooperative Movement, National Farmers Union and the New Democratic Party.  He was predeceased by his brothers: Harry, Bruce, Clark and James Aitken; and sister, Margaret Martin.  Don is survived by his loving wife of 56 years, Doreen; sons, Gordon (Joyce) and Allan (Sherry) of Eyebrow, SK; daughter, Lois (Kent) Plumer of Saskatoon, SK; grandsons: Jonathon, Justin and Spencer Aitken; granddaughters, Bronwen and Kenna Plumer; sister, Janet Grasdal of Regina, SK; sisters-in-law: Lorna Aitken, Helen Aitken, Marjory Smith, Jean Davidson and Velma McInnes.  The Funeral Service will be held on Tuesday, December 9th, 2014 at 1:00 p.m. in Moose Jaw Funeral Home.  Pastor Sharon Schultz will officiate and interment will take place at Sunset Cemetery.  As an expression of sympathy, donations in Don’s name may be made to The United Church of Canada Mission and Service Fund, 3250 Bloor Street West, Suite 300, Toronto, ON M8X 2Y4 or the Canadian Red Cross, 1-54 Stadacona St W, Moose Jaw, SK S6H 1Z1.  Arrangements are entrusted to Moose Jaw Funeral Home, 268 Mulberry Lane.  James Murdock, Funeral Director 306-693-4550.