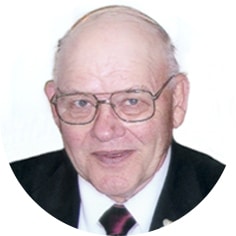 It is with great sadness and heavy hearts that we announce the passing of our beloved father, grandfather and great-grandfather, George Edward Adrian, on Sunday, September 6th, 2015.  The Funeral Service will be held on Saturday, September 12th, 2015 at 1:30 p.m. in Moose Jaw Funeral Home with Major Mervyn Halvorsen officiating.  George was born in Chaplin, SK on August 6th, 1930.  He met and married Marguerite Nelson on January 22nd, 1953.  They lived in Moose Jaw doing electrical work during the week and farming on the weekends until he got his dream of a farm near the city.  They lived there until Marguerite’s health began to fail and then moved back in to the city.  He remained in the home until her passing and then moved to Caleb Retirement Homes until his health failed.  He was predeceased by his wife, Marguerite; parents, George and Eleanor (Dokken) Adrian; and two brothers.  George is survived by his daughters: Emily (Harvey) Usher, Georgina (Graham) Hetherington and Bernice (Jim) Coghlin; grandchildren: Todd (Kim), Sean and Jason (Kathleen) Usher, Janet Hetherington, Jennifer (Cody) Westgard and Kyle (Taylor) Coghlin; great-grandchildren: Aidan Greenland, Reegan Usher, Hayden Usher, Evan Gettman and Bethany Westgard; as well as 11 brothers and sisters.  He is also survived by a lady friend whom he had found in the last two years, Inez Froehlich.  As an expression of sympathy, donations in George’s name may be made to SCRAPS (Stray Cat Rescue and Protection Society), 1254 Athabasca St W, Moose Jaw, SK S6H 6C6.  Arrangements are entrusted to Moose Jaw Funeral Home, 268 Mulberry Lane.  James Murdock, Funeral Director 306-693-4550.