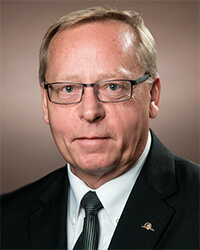 Born and raised in Moose Jaw, Todd completed his grade 12 diploma from Peacock High School in 1974.  During his school years and after graduation, Todd worked for Royal Ambulance Service.  In July 1974, Todd began his funeral career at Parkview Funeral Chapel.  He convocated from the University of Saskatchewan in 1983 as a licensed Funeral Director/Embalmer, accepting the instructor’s award for showing the best overall performance over the 24 month program.  Todd received a certificate from the Funeral and Cremation Services Council of Saskatchewan for 35 years as a licensed embalmer and director in Saskatchewan.  Todd currently resides in Moose Jaw with his wife Teresa and also has two sons.